Sonia Friedman Productions is delighted to announce further casting for the long-awaited UK premiere of Dreamgirls which will have preview performances at the Savoy Theatre from 19 November and Opening Night on Wednesday 14 December 2016.

As previously confirmed, American actress and singer Amber Riley will star as Effie White. Ms Riley will be joined by Ibinabo Jack as Lorrell Robinson and Liisi LaFontaine as Deena Jones, making up the soulful singing trio ‘The Dreams’. Nicholas Bailey will play Marty, Adam J. Bernard will play Jimmy Early, Tyrone Huntley will play C.C. White and Joe Aaron Reid will play Curtis Taylor Jr, with Ruth Brown and Karen Mav alternating the role of Effie White at performances when Amber Riley is not scheduled to perform.

Sonia Friedman, Producer: “It was wonderful to announce our star Amber Riley a few weeks ago. Now, having seen more than 1000 performers audition over many months, I am thrilled that we can reveal most of our Dreamgirls company. It is 35 years since its Broadway premiere, so to finally be the ones to bring it to London with our world-class creative team and incredibly talented, exciting young cast is an honour and privilege. I believe we now have the perfect team to create a sensational production that I hope will be well worth the wait.”

Amber Riley is best known for her role as ‘Mercedes Jones’ in the Golden Globe Award-winning musical comedy, Glee. Additional television appearances include playing ‘Addaperle, the Good Witch of the North’ in the NBC live performance of the musical, The Wiz and competing in Dancing with the Stars, which she won in 2013. Riley’s numerous theatre credits include Alice in Wonderland, A Midsummer Night’s Dream, Into the Woods and Mystery on the Docks with the Los Angeles Opera. In November 2012, she made her New York stage debut to rave reviews in New York City Center’s Duke Ellington’s Cotton Club Parade. 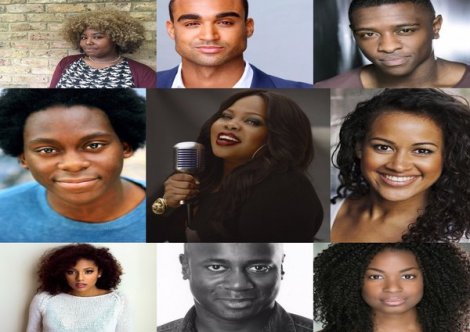 Liisi LaFontaine was a finalist on The Winner Is (NBC) as part of a singing duo The LaFontaines with her mother Nita Whitaker. Her stage credits include Ti’Moune in Once on This island (LACHSA production), Mimi in Rent (Skylight theater) and Trisha in Dog Sees God (Skylight Theater). Her first EP titled Golden is now available on iTunes.

Joe Aaron Reid is currently starring as Benny in In The Heights (Kings Cross Theatre). Broadway theatre credits include If/Then, Chicago, Curtains, Ghost, Catch Me If You Can and Finian’s Rainbow. He also appeared in the NBC drama Smash for two seasons.

Ruth Brown found fame in the first series of BBC’s The Voice, reaching the semi-finals under the mentorship of Sir Tom Jones. She has since gone on to release her first UK single ‘P.O.P.’ and is soon to debut her new album, Letters of Truth.

Karen Mav was recently a contestant on the 2015 series of ITV’s The X Factor where she wowed TV audiences and judges with her take on Etta James’s ‘I’d Rather Go Blind’ and the Whitney Houston version of the classic ‘I Will Always Love You’.

Full information on performance schedules and further casting will be updated on the official website Dreamgirlswestend.com

As previously announced, Dreamgirls will be Directed and Choreographed by Olivier and Tony Award®-winning Casey Nicholaw (The Book of Mormon, Disney’s Aladdin and Something Rotten!), with Set Design by Tim Hatley, Costume Design by Gregg Barnes, Lighting Design by Hugh Vanstone, Sound Design by Richard Brooker and Hair Design by Josh Marquette. The Musical Supervisor will be Nick Finlow, the Orchestrator will be Harold Wheeler, with Additional Material by Willie Reale.

Dreamgirls transports you to a revolutionary time in American music history. Dreamgirls charts the tumultuous journey of a young female singing trio from Chicago, Illinois called ‘The Dreams’, as they learn the hard lesson that show business is as tough as it is fabulous, and features the classic songs ‘And I Am Telling You I’m Not Going’, ‘I Am Changing’, ‘Listen’ and ‘One Night Only’ .

With Book and Lyrics by Tom Eyen and Music by Henry Krieger, the original Broadway production of Dreamgirls, Directed and Choreographed by Michael Bennett opened in 1981 and subsequently won six Tony Awards®. The original cast recording won two Grammy awards for Best Musical Album and Best Vocal Performance for Jennifer Holliday’s ‘And I Am Telling You I’m Not Going.’ In 2006 it was adapted into an Oscar winning motion picture starring Beyoncé Knowles, Jennifer Hudson, Eddie Murphy and Jamie Foxx.

Website: Dreamgirlswestend.com
Telephone: 0844 871 7687
Prices: From £20 (from £15 during previews)
At every performance there will be 100 accessibly priced seats, including £20 seats available in advance and £15 day seats available on the day of the performance.

‘Listen’ was written for the 2006 motion picture by Cutler, Knowles, Krieger, Preven, with revised lyrics by Reale (new version created for a 2009 US touring production of “Dreamgirls”)

Olivier and Tony Award®-winning Director and Choreographer Casey Nicholaw’s West End credits include co-director of The Book of Mormon at the Prince of Wales Theatre, Disney’s Aladdin which opens in London this summer and The Drowsy Chaperone. On Broadway, credits include The Book of Mormon, Disney’s Aladdin, Something Rotten!, Tuck Everlasting, Elf: The Musical, The Drowsy Chaperone, Monty Python’s Spamalot. Casey’s additional New York credits include the highly acclaimed City Center Encores! productions of Anyone Can Whistle, Follies, Bye Bye Birdie and Can-Can, plus directing and choreographing the world premieres of Minsky’s at Center Theater Group in Los Angeles and Robin and the 7 Hoods at the Old Globe, San Diego.