All That Fall – Arts Theatre London

Seeing this show was definitely a case of selective synopsis reading on my part. Earlier in the day I conducted my usual pre press night checks, such as check the start time, nearest tube to get home, theatre and brief amount of research into the play and its origins and this is when it hit me. I’d missed the key capital lettered typed word in the press release heading “BLINDFOLDED”. Somewhat catapulted out of my comfort zone, I begin to embrace the idea. 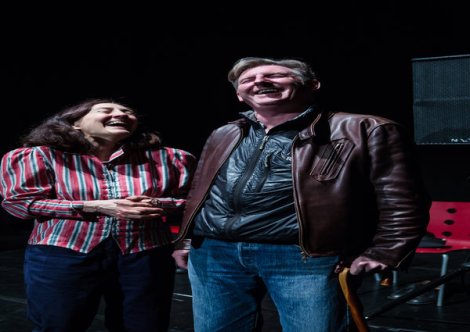 We take to our seats, having been handed a blindfold and were told where the concept came from. Written by Samuel Beckett for radio in 1956, it was first broadcast on 13th January 1957 by the BBC. All That Fall is much less well-known than Beckett’s stage works and Out Of Joint approached the authors estate to ask whether it could be performed. They were asked what their “vision” was for the production. To which they replied quite simply there is no vision the audience will be blindfolded in order to appreciate it exactly how it was intended in audio form.

The actors led by Bríd Brennan as Mrs Rooney show utmost skill in creating the visionary performance. Sound designed by Dyfan Jones is an immersive experience with expert direction from Max Stafford-Clark which means that the creation of an afternoon excursion is fully appreciated by the audience. Adrian Dunbar (Mr Tyler and Mr Rooney) gives superb characterisation in both roles.

Action takes place all around you, well that’s what it feels like when you are sat in the stalls. The sound of the train racing past gave me goosebumps with its realness, a testimony to Jones creation. This evening highlighted to me how we take for granted that you have to see something in order to appreciate its glory. You don’t but what you need to do is to feel it. I felt all sixty minutes of this play, the sun, the rain, the train and village life and despair of hearing of a tragedy at the end.

This is an experience I wouldn’t want to have missed for the world. Performed and appreciated as it was intended by a visionary and exciting theatre company.

All That Fall – Arts Theatre London