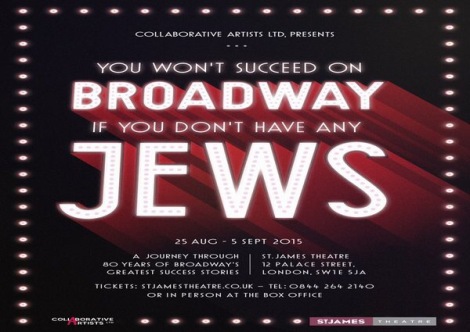 ‘You won’t succeed on Broadway if you don’t have any Jews.’ This quote from the Monty Python musical Spamalot has inspired a new show, dedicated to celebrating the contribution of Jewish people to musical theatre over the last century. From Stephen Sondheim to Irving Berlin, Jule Styne to Burt Bacharach, I certainly had no idea so many great names in the industry came from a Jewish background. (Although if I’m honest, I can’t say I’d ever actually thought about it.)

You won’t succeed… takes us on a journey through some of Broadway’s – and the world’s – favourite musicals, performed by a talented company of singers and dancers. It’s also a bit of a history lesson, with educational videos introducing each decade and giving us a quick summary of both Broadway’s history and the big names at work in musical theatre during those years. Each video is followed by a selection of songs from that decade, with a nice mix of solo, group and full company performance. 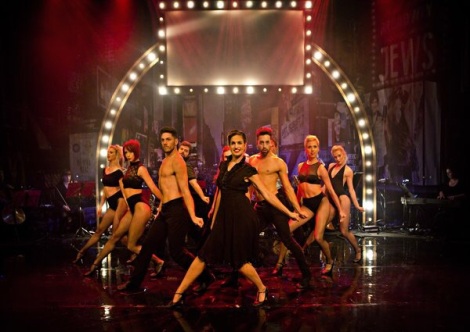 First things first. This show is gloriously, unashamedly stagey, in all the best ways; if you’ve had a bad day, it’ll not only cheer you up, but send you out into the streets singing and dancing and scaring the locals. But amid all the showbiz teeth, jazz hands and bare-chested young men lie some truly sensational performances. Danny Lane steals the first half with his powerful rendition of Everything’s Coming Up Roses from Gypsy, before a rousing, foot-stomping performance by the full company of Tradition from Fiddler on the Roof takes us merrily into the interval.

Act Two begins with a medley from Chicago, followed by the hilarious Getting Married Today from Company, featuring a terrific performance from Sarah Earnshaw as the reluctant bride-to-be. Other highlights include numbers from Beauty and the Beast, March of the Falsettos and Hairspray – but, for me, the standout moment of the evening was Jackie Marks, the original West End Fantine, singing I Dreamed a Dream from Les Mis. I’m not going to lie; I got goosebumps. Unfortunately, we’d barely had a chance to get our breath back before the lovely moment was smashed to pieces by the opening bars of Fame. Now don’t get me wrong – I love Fame, and credit to Sophie Evans and the leg-warmer-clad dancers for following such an incredible performance, but the change of pace just felt a bit too sudden and dramatic, particularly as we were then plunged back into emotional territory with Papa Can You Hear Me from Yentel.

With such a huge body of work to draw on, there were always going to be some omissions, but it was a surprise that neither The Sound of Music nor West Side Story made their way on to the bill. Though the band performs a musical interlude from each show, these are rather overshadowed by the fact that we’re trying to pay attention to the voiceover at the same time.

You won’t succeed… is a triumphant celebration of the Jewish contribution to musical theatre, full of humour and sparkle. But though it features plenty of references to Jewish culture, this by no means excludes anyone not from that background. Because what this show really is, is a celebration of musical theatre in general. Yes, it’s fascinating to discover how many amazing musicals have been written by Jewish people, but at the end of the day, it makes zero difference, really. The important thing is that someone, somewhere, is writing the musical that will still be entertaining and delighting us a century from now. And if it happens to feature jazz hands – so much the better.