My regular readers will know that I’m a huge fan of the West End show Jersey Boys. I’ve lost count of the number of times I’ve seen it. So imagine my excitement on hearing the news that it’s arriving in my local theatre. Will the touring production have this “Big Girl” crying for joy or disappointment?

Jersey Boys tells a true story and is based on the lives of Frankie Valli and The Four Seasons. Having sold 175 million records worldwide they were then inducted into the Rock & Roll Hall of Fame in 1990. If like me, you think on your first visit, you won’t know any of the songs, I can assure you that you will be surprised by the amount you do. There are so many that were penned by the geniuses Bob Gaudio and Bob Crewe including Beggin’, Sherry, Walk Like A Man, December, 1963 (Oh What a Night).

Frankie Valli was portrayed by Matt Corner for the evening. He played the role well and looked genuinely moved by the audiences reaction to him in certain songs not least after he finished “Can’t Take My Eyes Off You”  Stephen Webb as our Tommy DeVito was very different to how I’ve previously seen it. It had an aggressiveness and I actually did feel sorry for Tommy at one point. in so much that he displayed an amount of vulnerability and was misguided in his actions whilst striving to make a success of the band. A new experience for me and showed me that even after the amount of times I’ve seen the show there’s always an alternative perspective you can gain from it.

Sam Ferriday as Bob Gaudio showed the audience his fine singing voice especially in “Cry For Me” his opening scene. Lewis Griffiths our Nick Massi could easily be the next “big West End star”. It’s not the biggest of roles in the show but it is key. Griffiths‘ delivery of lines in his slow charismatic deep voice meant that no one missed the “nuances” of his very fine performance. Amelia Adams-Pearce (Mary DelGardo) demonstrated both the feisty side and the heartbreaking reality of a woman effectively bringing up her girls alone. Knowing that her husband had a “work family” who got to see a lot more of her husband than she did. It was a great performance. 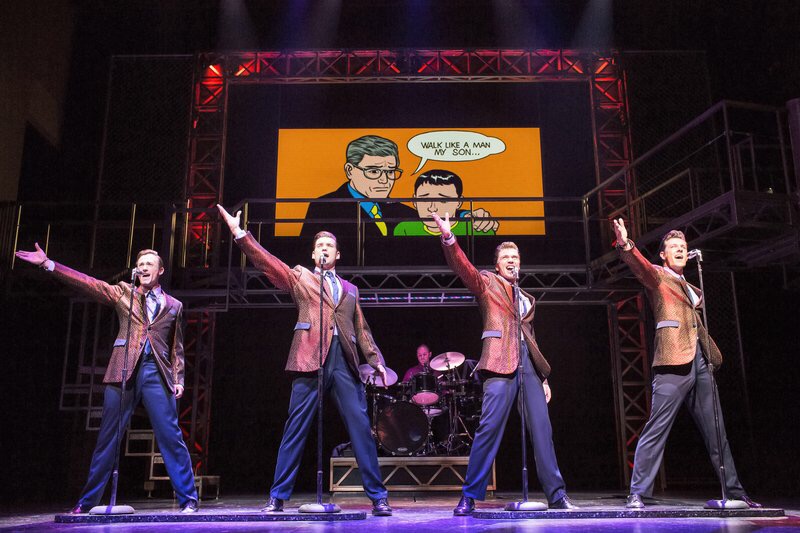 This production is brought to you by the same team who have worked on the Broadway and West End shows. So is it any wonder that what you see on the tour is an exact replica of what has been seen by millions of people worldwide.  There were a couple of minor technical issues such as the sound balance and screen being slightly out of sync on occasion but it didn’t hamper the outstanding entertainment value of the evening. The cast may put their own reflection on the delivery of lines but the set, costumes, choreography and so on remain exactly the same. Although I did spot a few tiny differences but then that’s the fan in me coming out.

Jersey Boys Tour is a West End experience on your own doorstep so make sure you “Walk Like a Man” buy your tickets today because “the crowd really do go wild”, with a curtain call full house standing ovation. Returning to my original question the answer of which is yes this “Big Girl” WAS metaphorically crying tears of joy by the end of the evening!