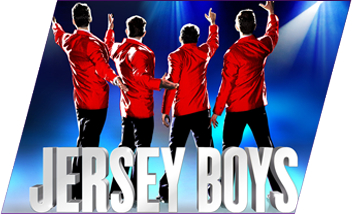 It’s no secret that my favourite show is Jersey boys I just can’t (along with my mum) get enough of it and consequently have lost count of how many times I’ve seen it!

I toyed with the idea of writing this review but then I thought “do you know what we need to celebrate this tremendous cast, it’s alternate Frankie Sandy Moffat and the wonderful understudies that I saw on Saturday 25th July Chris Stoddart (Bob Gaudio) Ben E Jennings (Joe Pesci) Lucinda Gill (Mary DelGardo)”

I saw Sandy Moffat in one of his very first Saturday Matinees and to see him now as Frankie Valli has seen a phenomenal growth in his confidence and therefore performance. He was great at that first show but to observe him truly become Frankie in front of your eyes is magnificent and it’s no surprise that he has been nominated for West End Frame‘s Alternate/Understudy of the year award. Moffat genuinely moved me to tears when singing “Fallen Angel” such an intensity in his portrayal of grief at the loss of his daughter to drugs.

Chris Stoddart as Bob demonstrates what a talented cover cast they have in Jersey Boys He plays Bob from a slightly different perspective and for someone who has seen the show so many times this is fresh and a joy to watch. Whilst he delivers exactly the same lines, he puts an alternative emphasis on the delivery which is superb. His opening rendition of “Cry for me” gave me goosebumps.

Ben E Jennings’ Joe Pesci is always a joy and makes me chuckle in the “I can arrange a sit down scene”.

Lucinda Gill as feisty Mary was particularly interesting again for me to watch and I enjoyed the extra exuberance in her performance.

It goes without saying that the regular cast such as Jon Boydon, Gary Watson, Thomas Goodridge, Matt Hunt, Simon Adkins, Matthew Cutts were all sublime as usual.

To summarise I would say don’t be disappointed if your favourite isn’t on celebrate the fact that if a person is at the top of their game enough to be cast as an alternate or cover, they are going to give you one hell of a show. The reason being, they get less of an opportunity to shine, so off course they are going seize it with both hands! An awesome job guys and girls!

One response to “Let’s hear it for the @JerseyBoysUk alternates and covers! Review of Saturday 25th July Matinee 5⭐️”