The Dresser by Ronald Harwood

Witty and heartfelt, Ken Stott and Reece Shearsmith’s evocation of this classic play about theatre life is moving and impressive.

The house darkens, the curtain lifts and bombs shake plaster from the ceiling. We are in the middle of a ‘tatty tour of the provinces’, marooned in the dressing room of a theatre battered by German shelling in the 1940s.

Reece Shearsmith, as Norman, the eponymous dresser, bustles fretfully around the space, refusing to believe that his beloved ‘Sir’ might be ill despite stories that he’s been seen raging in the town square, tore off his clothes in the rain, stamped on his hat and been carted off to hospital. Before meeting the man himself we hear about him from his disappointed mistress, Her Ladyship, fiercely played by Harriet Thorpe, bubbling with fury at her wasted life of cold digs, cold railway platforms and darning tights. 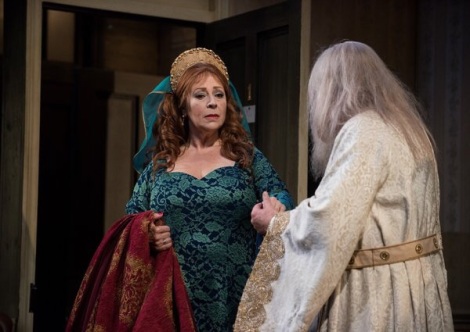 We meet Madge, sensitively played by the excellent Selina Cadell, Sir’s loyal manager of 20 years, clearly in love with him but consigned to the role of patient spinster content to remain close enough, to be of use. And then we meet ‘Sir’, who staggers into his dressing room, clearly running a temperature, sweating and unfocused, constantly asking which play they are doing tonight. 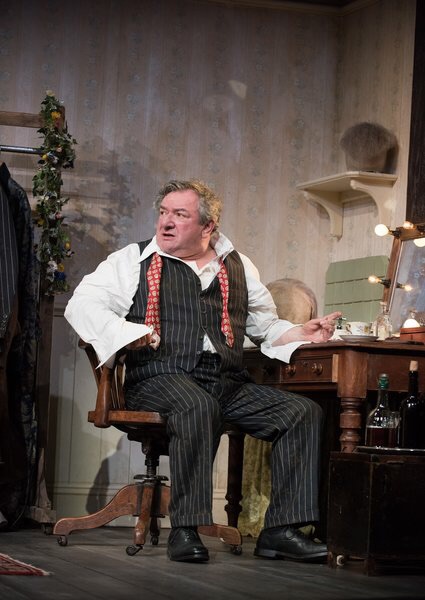 Ken Stott brings a gritty gravitas to this role, conjuring Sir’s obvious charisma which combined with a bullying nature, vast ambition and terror of inadequacy; has constant need for praise and the promise of a full house. The actor-manager of his day, needed to be strong and mercurial to sustain a life of constant travel and discomfort. Stott gives a magnificent performance, full of sound and fury as he flails around the stage on the last night of his life. At one stage he spouts random lines from Shakespeare plays (words spattering from his mouth like a Dalek) in a bid to anchor his brain in the King Lear production which he must somehow perform. His cast of bewildered actors – too old or unfit too be called to the war – help him through the play, determined that the show must go on.

The comedy level is very high in this production. The scene where King Lear’s anticipated on the stage, is deliciously funny. Sir, we can see, slumped in the wings. “Methinks I saw the king”, a hapless actor spouts looking hopefully towards the wings. “Methinks the king approaches,” still no sign of the king. “I was mistook”.

But at the heart of this play is relationship between Sir and Norman. In his attempt to buoy up the dying man, Norman tells him how much the audience is loving his performance “they say you look like Michaelangelo or William Blake” and asserts that you were “at it tonight, Sir, really at it”. Sir, like a child, soaks up the praise.

Shearsmith and Stott bounce off each other brilliantly, presenting a perfect yin and yang of protective love, with their mutual neediness. They spar with a familiar repartee within their exclusive ‘safe space’ where honesty can truly exist. The realities of their situation is painfully clear to the audience. The agony of Norman as he ponders his fate over the dead body of his beloved Sir is intensely moving.

As Sir says in one of his last lines, “The most wonderful thing in life is, to be remembered.” This production of the Dresser will certainly be remembered by those fortunate enough to see it.

The Dresser by Ronald Harwood

★★★★★“The most wonderful thing in life is, to be remembered.”

One response to “Review: The Dresser”