Review: Lunch and The Bow of Ulysses

Many people will know that I’m not usually lost for words but for once I am and I can’t actually explain why? Steven Berkoff’s Lunch and The Bow Of Ulysses are two plays, set twenty years apart. A creative setting, which depicts a seat at the end of an ordinary beach pier, the sound of the sea lapping and the occasional gull is heard. Not being overly familiar with Berkoff’s other works I found the wordy dialogue at times awkward, but with a wonderful poetic connotation. It’s a series of observations and inner thoughts spoken aloud. This is how it made me feel, it was as if I was a fly on the wall, that I was party to the inner wants and dreams of two people meeting.

Lunch (1983) and it’s sequel The Bow of Ulysses (2002) are two of Berkoff’s finest small pieces, examining the relationship between a couple when they first meet and have, what appears to be, an abortive one-night-stand; and how they are years later after two decades of marriage.

Shaun Dooley and Emily Bruni are polar opposites but unwittingly similar, looking for that elusive closeness with another person. Indeed that intimacy, which for whatever reason, has eluded them both until now. There are moments when the sheer force and power that Dooley uses to deliver his lines, means that we’re shocked, not necessarily by the words or even the actions, but by the inference, the sub text is present in this intelligent piece.

The first play rich and dark leaves way to its second, set twenty years later, which is both bleak and dismal. The desolation felt of missed opportunities and wasted lives gives a darkness, as if a thunderstorm has descended on a summer’s day. Each blaming each other for their utter disappointment in life and their non-fulfillment. 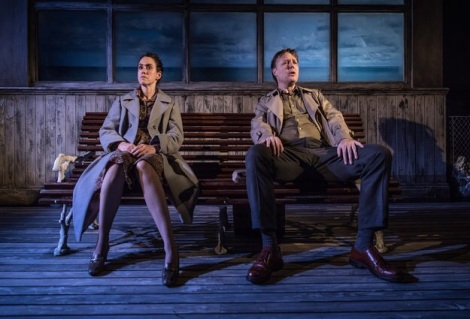 Both the outstanding acting of Dooley and Bruni in addition to the directing debuted, Nigel Harman are a sight to behold, and at times I felt breathless, completely lost in my concentration. However the deeply depressing second play left me wondering if we should have left the couple at the end of the first.

Without doubt, too be watched, appreciated but not necessarily enjoyed, more devoured with intellect and contemplation, about its meaning.

Lunch and The Bow of Ulysses