The first thing most people would agree on here, is that the venue for Floyd Collins is spot on. Wilton’s Music Hall is steeped in history, and its ruggedness serves as the perfect backdrop for this Southern American jaunt into a haunting cave of wonders. The performance space itself, feels pretty informal, and the actors use the whole auditorium, appearing around the audience throughout. Such direction can often feel perturbing as an audience member, but that’s not the case here.

Floyd Collins, by Adam Guettel and Tina Landau, is based on a true story. It tells of the ‘greatest cave explorer ever known,’ who tragically got stuck while exploring ‘Crystal Cave.’ The rescue efforts became National news, attracting much media attention to this little known part of Kentucky back in 1925.

There’s an overall rawness to this piece. It’s real people, real lives, real emotion. There’s no showing off business, but there are some wonderful standout performances.

Rebecca Trehearn shines as Nellie Collins, with a wonderful mix of maturity and childlikeness. She has an impressive vocal range, and maintains a strong stage presence throughout.

Samuel Thomas and Daniel Booroff, as Floyd’s brother and news reporter Skeets Miller respectively, both demonstrate strong emotional bonds with the ‘prisoner,’ as he is hauntingly described later, and one shudders at the pain these people must have gone through to see him down there.

Ashley Robinson, who trained in North Carolina, gives an impressive performance as Floyd Collins himself. A difficult role for an actor; he doesn’t leave the stage. His presence is felt, ever in the background, and one wonders at the emotional toll this must take on him throughout the show, to maintain in this state. It’s difficult to watch at times, and the tension built-in places is nail-biting. 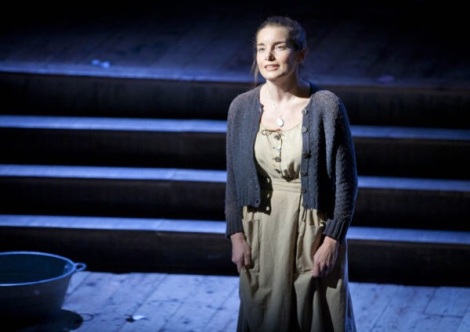 The set is sparse, and the overall look blends well with the costumes. A light mix of neutral colours, there is nothing too-try hard about the whole thing, which helps keep the focus on the current happenings. That being said, there is some wonderfully clever staging, involving scaffolding, a passage under the stage, and very effective rope usage.

The musical style could be described as having a Sondheim air to it – a nice mix of vocal effects in the way of noises and trills, with a hint of yodelling. There’s an effective echo used initially, to demonstrate just how far underground Collins as travelled. He seemingly sings a duet with himself, and later the same echo can be heard throughout various harmonies, becoming a haunting motif throughout the show. There are also some unexpected upbeat gems appear occasionally, providing a welcome break from the tension of the whole situation.

Despite being difficult to hear what the actors are singing at times, the overall effect is very atmospheric. This show successfully tells the story of a brave man, and how much he was loved by those around him.