MUST END 26 MARCH 2017 AT THE PICCADILLY THEATRE

One of London’s best loved musicals, JERSEY BOYS, will close at the Piccadilly Theatre on Sunday 26 March 2017 following nine amazing years in London. JERSEY BOYS is currently the sixth longest musical running in the West End. The producers are very proud that London has taken the show to its heart and they are equally delighted to announce that a second national tour of JERSEY BOYS will open in December 2017.

Producer Michael David said, “When we brought JERSEY BOYS here nine years ago, we hoped it was a good idea and that West End audiences would embrace it, but you never imagine it’ll multiply and resonate as much as it has. We couldn’t be more proud of the cast and crew who gave their all every night, and are profoundly grateful to the audiences who returned that energy without fail. Our time in London has been extraordinary, and we hope audiences around the UK will continue to embrace JERSEY BOYS as we bring the show to their hometowns.”

JERSEY BOYS first opened in London at the Prince Edward Theatre on 18 March 2008 and moved to the Piccadilly Theatre in March 2014. The first UK and Irish Tour of JERSEY BOYS was a record-breaking success and ran for 18 months, from 4 September 2014 to 5 March 2016. The second national tour will open at the New Alexandra Theatre, Birmingham in December 2017.

JERSEY BOYS is the remarkable true story of Frankie Valli and the Four Seasons and their rise to stardom from the wrong side of the tracks. These four boys from New Jersey became one of the most successful bands in pop history, were inducted into the Rock & Roll Hall of Fame and sold 175 million records worldwide, all before they turned 30. The show is packed with their hits, including Beggin’, Sherry, Walk Like A Man, December, 1963 (Oh What a Night), Big Girls Don’t Cry, My Eyes Adored You, Let’s Hang On (To What We’ve Got), Bye Bye Baby, Can’t Take My Eyes Off You, Working My Way Back to You, Fallen Angel, Rag Doll and Who Loves You.

Winner of Broadway’s Tony, London’s Olivier and Australia’s Helpmann Awards for Best New Musical, JERSEY BOYS is the winner of 57 major awards worldwide and has been seen by over 23 million people worldwide. As well as still running on Broadway and in the West End, JERSEY BOYS can be seen across the United States on its US National Tour and has just completed a record-breaking run in Las Vegas.

JERSEY BOYS is written by Marshall Brickman and Rick Elice, with music by Bob Gaudio and lyrics by Bob Crewe. The London production is staged by the entire original Broadway creative team, led by director Des McAnuff and choreographer Sergio Trujillo, with scenic design by Klara Zieglerova, costume design by Jess Goldstein, lighting by Howell Binkley, sound by Steve Canyon Kennedy and projection design by Michael Clark. The orchestrations are by Steve Orich and the music supervision and vocal arrangements by Ron Melrose.

JERSEY BOYS is produced in London by the Dodgers, with Joseph J. Grano, Tamara and Kevin Kinsella, Pelican Group, in association with Latitude Link, Rick Steiner, and a small clutch of UK colleagues. 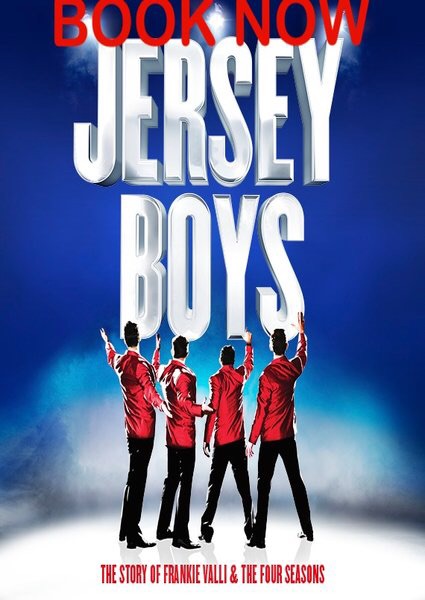