Robert Louis Stevenson was born in 1850 and was a sickly child who was plagued with illness throughout his life. He died at the early age of just forty-four. Treasure Island, written in 1881 was serialised in a children’s magazine and was in fact his first real success. It was conceived on a wet day in Braemar, when to amuse his step-son he drew a romantic island complete with buried treasure.

This was my first visit to the open air theatre space of the Iris theatre, and may I say what an innovative idea to use this beautiful Grade I listed building and its’ surrounding tranquil gardens. However point of reference  especially those accompanying children, there are no toilet facilities. There are nearby ones which charge a fee of 50p, but I just felt it important to advise especially as the show is two and a half hours long. Do not let this put you off, but its wise to be forewarned.

When we were issued our tickets we were told if we were either Pirates or Privateers an intriguing concept. 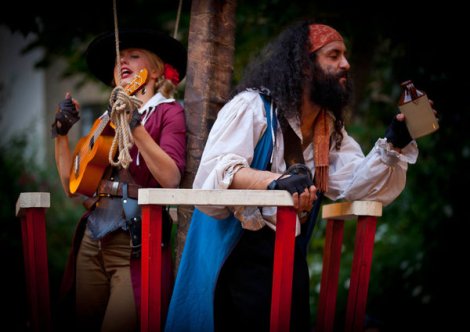 My question was, whether we ever grow up and do the thoughts of swashbuckling pirates ever lose their appeal?

The opening scene takes place within the church a pretty and respectful air descends shortly to be disrupted by the actors who take their places, Harold Addo, Adrian Quinton, Dominic Garfield, Dafydd Gwyn Howells, Rebecca Todd, Nick Howard-Brown and Anne-Marie Piazza. The ambience of a ale-house created well and the scene set we move into the courtyard and this is when the audience are divided into the two camps. The space is creatively segmented into four different areas and as we move through the evening camaraderie strikes up of “them and us scenario”. It did concern me that this would delay the process significantly but surprisingly it didn’t. What I would say is that it did make you feel as if you would like to see the performance again if only to be in the other group, as some of the evening you are separated and you can’t help but wonder what the other gang are experiencing.

Telling the story true to the book is no mean feat and this cast does it superbly, engaging with the audience whether young or old at every available opportunity. This is a magical performance space with its twinkling fairy lights and rustic charm and you cant help but to be swept along with the action. There’s plenty of sword fight and sea shanty’s to enjoy and all perfectly performed by this talented cast.

So returning to my question: Are you ever too old for pirate’s to lose their appeal ? My answer is quite simple and that’s an emphatic NO! Perfect for any age, even those that haven’t seen single figures in years. Get yourself to the Iris Theatre for some swashbuckling fun and remind yourself how fun it is to be a pirate Yo Ho Ho!