We are a spoiled generation. Obsessed with mundane TV, consumerism is our new religion, and we are mired in political apathy. If only there were a war, to draw solid lines of certainty, to join us all together with a common goal.

Through a misfit gathering in a prison cell, Martin McNamara reminds us how easy it is to simplify the past, and that the war era provided anything but easy answers. Traitors, Cads and Cowards asks some probing questions about politics and violence, and there are lessons for all. 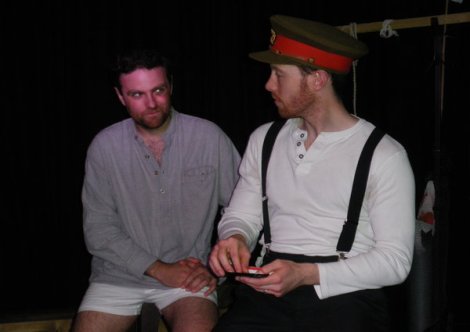 It is 1916. The Easter Uprising has just been quelled, and Britain (still an empire) is deeply entrenched in the First World War. Shut in a cell together, we encounter three men who are doomed to dislike each other. One is an Irish Volunteer (Liam) who took part in the uprising, another is a deserter from the front (Alfred), while the other is a conscientious objector (Henry). Hardly a recipe for cosy conversation.

The cell is sparse; one bed, tin cups and rough blankets. Each man is mired in his own musings, each convinced that they are the most injured by the war, and dismissive of the others. In such confined quarters, the atmosphere is intense. Alfred (Aidan Casey) is fantastically edgy, endlessly jabbering and gesturing. His quirks begin to take on a more sinister meaning as his story develops. Liam (Shane Noone) is imbued with political certainty and the truth of his quest. Henry (Benedict Waring) is initially a comic extra, providing a figure of fun for the other inmates, and awkward in his attempt at erudite reasoning which comes across as so much bluster. 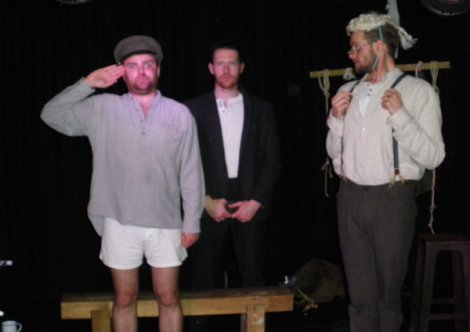 As the play progresses, we delve further into each character’s past. Donning simple pieces of costumes, the others re-create the back story of each character. This provides lovely bit parts, from an over-enthusiastic sergeant major to a blithering judge. These comic touches are a welcome relief, especially as the truth behind each character and the price they had to pay to be there, is revealed.

Slowly, the bickering unravels as each man grows in his understanding of how the others have suffered. Any ideas of glory, decency or even political certainty are washed away. Through confrontational dialogue, the hypocrisy and lunacy of the war is laid bare. 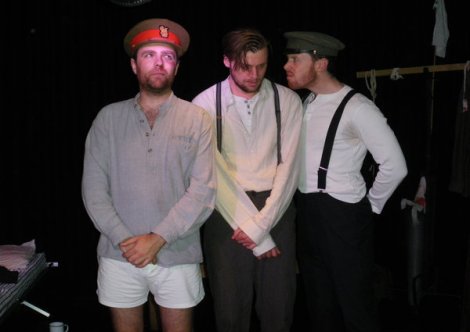 Perhaps there is one thing we could learn. In these days of mistrust, of blame, of hatred and suspicion, we should remember that, when people are placed in close quarters with each other, our differences might begin to blur. Perhaps we should look to those who seek to divide us far more than blaming our neighbours. It might just be that those we consider the most cowardly might turn out to be the bravest of all. Courage comes in many guises.

A stark, powerful performance that will linger with you long after you leave the theatre.