The moment you arrive at the Prince Edward Theatre it feels as if it has been “Disneyfied”. I mean that in the nicest possible way. All the staff are super friendly and helpful. Now it might just be the Disney magic or extra training. Whatever the reason, by the time you take your seat you are already regressing to childhood and beaming from ear to ear.

The opening number where Genie (Trevor Dion Nicholas) sets the scene, bursting forth with such verve and vibrancy it’s hard not to gasp with delight. We are so fortunate that Nicholas came over from Broadway for the opening run of Aladdin. He plays the role as a larger than life character and has you mesmerised from the very beginning. Aladdin, the title role played by Dean John-Wilson oozes charisma from every inch of his being. Playing opposite him as our gorgeous Princess Jasmine is Jade Ewen. In my mind a truly perfect Disney Princess. Their duets are divine and “A Whole New World” brought tears to my eyes, it was such a special moment.

Other noteworthy mentions go to Don Gallagher as Jafar, whom along with the audience I enjoyed “booing” when he took his bow (he has the theatrical pantomime-esque villain laugh off to a tee!) Babkak, Omar, and Kassim played by Nathan Amzi, Rachid Sabitri and Stephen Rahman- Hughes respectively were fun supporting characters as well as Jafar’s sidekick Iago, Peter Howe. 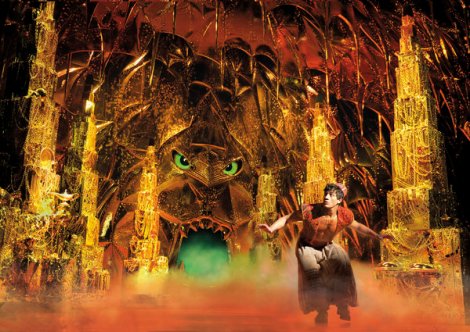 The staging of this production is so dazzling and bright it’s as if an artist’s paint palette has exploded across the stage. The jewelled treasure trove laden cave which conceals the lamp sparkles and is visually stunning. Add to this some amazing special effects, including pyrotechnics (I’m still wondering how the magic carpet flies, twisting and turning in front of our eyes), some seriously beautiful choreography perfectly executed by a tremendous ensemble and you have a visually spectacular production the like of which only Disney can deliver. A special mention for the lighting which heightens the vividness of costumes and staging to provide us with glorious technicolor viewing.

A magical show which could soften the hardest of hearts.  Wishes do come true, make yours by visiting the Prince Edward theatre and let Disney show you “a whole new world” in Aladdin.