I haven’t seen Sunny Afternoon for a long time, I was so attached to its previous cast that I must admit I think I’ve subconsciously shied away. However I do love this show and so when I was given an impromptu chance to see it I was there with bells on. As it was an unexpected visit I wasn’t going to write a review but merely sit back and enjoy. I realised that we had a cast which had some lead roles being covered, one of which was a third cover for Ray Davies (Nick Sayce). As most people know I champion understudies/alternates and so simply felt compelled to write a review. 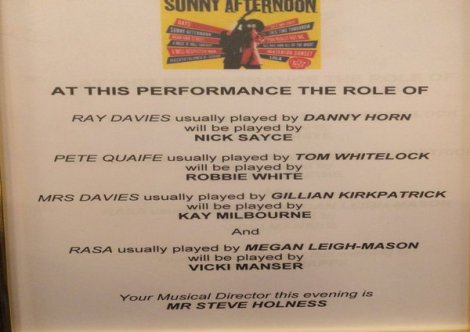 For those that aren’t aware Sunny Afternoon is the story of the iconic British group The Kinks. It tells of the rise to fame, management manipulation, sibling rivalry and a struggle to be heard. This is a show with a real and true story of a group of ordinary working class lads from Muswell Hill in London. Within this we get to hear their many compositions and join them on their journey to stardom and beyond. Songs include You really Got Me, Days, Waterloo Sunset, Dedicated Follower of Fashion, Lola and of course the title song Sunny Afternoon.

The opening number full of excitement and energy gives a glimpse of what joy was to come. Nick Sayce as Ray gives a commanding performance. He’s certainly no understudy from where I was sat in the front row. His voice and characterisation were effortless and so spot on that I quickly became absolutely transfixed on his every move. Playing his younger brother Dave was Oliver Hoare. Hoare  gave you the feeling of naivety at the start and the overwhelming need to be wanted which shows itself in his extrovert and excessive traits. What we felt with Hoare’s portrayal was, the sense of fun, being eccentric and sometimes egocentric, made him so entertaining to watch. The chemistry between Hoare and Sayce was palpable, as if they had been doing this show day in day out together for years, a testament to both of their talent and portrayal.

Mr Davies played by Stephen Pallister and Mrs Davies whose role was taken on by understudy Kay Milborne came into their in own in some really tender moments. Most noticeably when their sons were trying to break the band and needed approval from a parent as Dave was classed as a minor. Dead End Street has always been one of my favourites not least because of its powerful lyrics and Pallister and Millborne were excellent in this.

Davie’s wife Lithuanian descent Rasa was played by understudy Vicki Manser whom I loved from the very first time she said “it were alright” gave such a charming and captivating performance which made her character totally endearing. You felt her angst and heartbreak at not knowing what to do for the best, whilst being totally in love with Ray. The scene between Manser and Sayce singing Tired of Waiting was hauntingly beautiful and is still on my mind over twenty-four hours later.

Whilst this review was always about celebrating the cover cast which also included Robbie White as Pete Quaife, who was equally excellent as others already mentioned, I can’t not mention other notable performances. Admittedly I could run through the whole cast but just a couple of other mentions go to Damien Walsh whose drum solo was immense and Jason Baughan as Eddie Kassner. The choreography by Adam Cooper always leaves me breathless with delight.

Returning to the storyline and the music, particular highlights for me were the discovery of the raw riff of You Really Got Me by taking a pen knife to the speaker and turning up to full volume and more, having the vibration go through your whole body gives a total feeling of euphoria for me. Secondly Days sung a cappella moved me, sung with such emotion it’s a pivotal part of the show.

To summarise there’s been a lot of press recently at poorly behaved audiences giving esteemed understudies a rude and uncharitable welcome. This performance was the epitome of the reason why I always salute and champion understudies. They often work harder as they get fewer chances to shine and usually give every part of their being to deliver a performance of a lifetime never knowing when or if they will get a chance to do it again. My experience is that we the audience should feel privileged to witness these outstanding performances and tonight I felt I saw a star or rather stars being born! Congratulations Nick Sayce “You Really Got Me” and I hope to see you and this whole outstanding cast very soon.

★★★★★ Outstanding Performances ensured “You Really Got Me” Returning for more!