This play based on the true life story of actor Ira Aldridge by Lolita Chakrabarti has the ability to grab your attention and evoke so many feelings that you feel totally wrung out by the end. Now I appreciate that this may not be everyone’s idea of a thrilling evening of entertainment but for many such as myself this piece is exactly what we need in the West End right now. Yes, it’s about someone who lived in the 1800’s, but are we so far removed from the ethos and story in everyday life now? Of course the answer should be a resounding yes but unfortunately there is still, albeit in different guises the same shockingly poor racism today, just demonstrated in a different ways.

First performed in 2012 Adrian Lester returns to the stage in this fascinating piece. This career defining role for Lester shows his outstanding ability to have the audience in the palm of his hand. A truly engaging and masterful performance throughout. We see Lester in front of our eyes seemingly age with minimal changes of props and costumes, his whole being and demeanour becomes withered, portraying a defiant whilst broken image of an unaccepted and abandoned man. A truly astonishing portrayal of  Ira Aldridge. 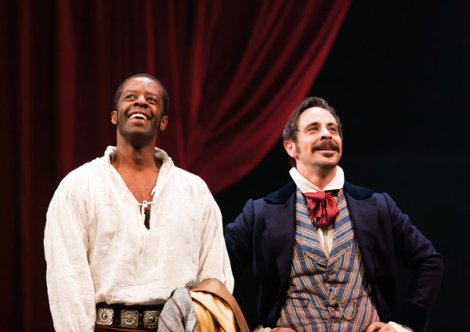 Emun Elliott as Pierre Laporte gives a strong performance and is endearing as encouraging and welcoming friend and staunch supporter. Which in then turns to despair and disillusionment as realisation sets in that there is an widespread intolerance of his friends race.

Pompous and condescending treatment comes from Mark Edel-Hunt as Charles Kean, whose father Ira Aldridge replaces when he is taken ill playing Othello. Edel-Hunt fuels the lynch party when reading the reviews the next morning, along with reporting the physically rough acting towards his wife (Charlotte Lucas) during the previous nights show. 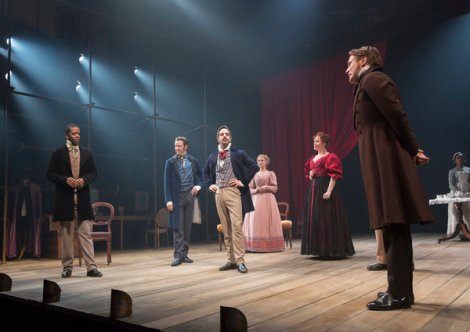 There are so many noteworthy performances in this play that this review would be endless. However it’s safe to say this piece wholeheartedly deserves all the acclaim it is getting. The acting by all is outstanding with some really career defining performances. The director (Indhu Rubasingham) has excelled in getting the very best out of this prestigious cast. Also worth mentioning was the movement of the performers which was choreographed by Imogen Knight. It was clean and sharp and created an ambience and feeling of the era. The shocking last scene really makes a statement and the stunned moments of silence before the bows is testimony to that.

In summary this is an excellent play perfectly executed, which deserves sell out audiences at every performance.