In/Out (A Feeling) – The Hope Theatre

Some plays fit gloriously into their surroundings. The Hope Theatre, a dark little room above a pub, captured perfectly the essence of, well, a dark room above a pub. Only this one is a brothel. Set in contemporary London, Ollie and Blue are doomed to circle the same small sphere of existence, searching for meaning or escape.

The seedy atmosphere is minutely detailed, thanks to Niall Phillips’ set design, with an array of empty coffee cups under the raised bed, cosmetics, a ring of baby wipes surrounding the central pillow and cover. Pots of cocaine swing around the actor’s heads, while threads of red ribbon drip down from above. This distinctive setting is mirrored by the writing. Andrew Maddock’s script is lilting, melodic; more poetry than dialogue. This creates distance between the characters, who never really communicate with the other. 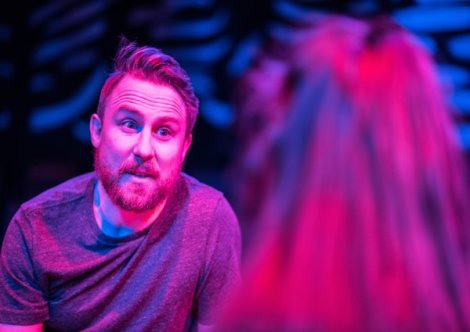 A series of jabbing monologues take us through the experiences of Ollie, a typical London lad who buzzes through a whirl of cocaine-fuelled fun, until a threat to his health forces him to pull up short and examine himself. He paces around the bed, bathed in sharp white light, constantly convincing himself he is having a good time. While Nicholas Clarke’s dialogue is incredibly dense, and he seemed more comfortable as the play developed, he didn’t quite deliver with the same aplomb as his female counterpart Alex Reynolds.

In the centre is Blue. She’s an immigrant who is trapped, forced to work as a prostitute in a squalid place, men coming and going, while she struggles to hold on to her sanity. Her place in the centre of the performance space mirrors the way her body is a commodity to be bought and sold, a thing on display. As she talks, she shifts, meeting the eyes of the audience, forcing them to confront the situation of women like her. The performance produces both disgust at a world that allows this exploitation, as well as a profound emotional connection. 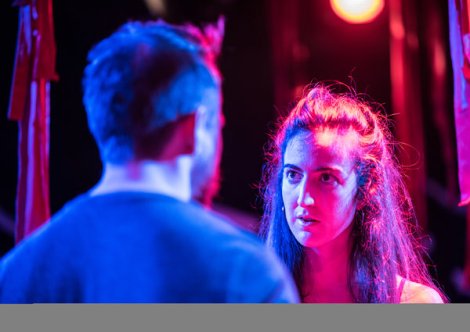 It has some great humorous lines, little echoes of our modern world. There are touching, gentle moments too, as Blue is drawn into actions she despises, lifting herself out of her own body in order to survive. It’s all too easy to imagine the real-world counterpart to her that exists, probably not far from the room we were sat in. Repetition is used to beautiful effect, with the same phrases repeating separately, and then together, as the characters meet. The detachment remains between them, echoing the question that the writer poses. Is redemption and understanding really possible? While I’m not a fan of the title, the use of in/out to encapsulate a range of emotions and actions is really effective, and is one of the reasons that this performance is one that will stay with you. It’s a captivating play that resonates far beyond its small setting.

In/Out (A Feeling) – The Hope Theatre