The first world war produced many stories of heroism and bravery and was ultimately considered a victory for the allies when the armistice was finally signed.  However, it was commanded by old generals brought up in the tradition that war was a gentleman’s game where the lower orders went off singing cheerfully and being ready to die for their king and country without understanding why.  Patriotic fervour was at its height and there are lots of well documented stories of teenage boys lying about their age to join up.  Whilst the army accepted them gratefully – when you are losing men at the rate of thousands a day you need a constant source of new blood – the recruiting staff never considered if these boys were emotionally ready for the horrors they were going to face.  This then is the backbone of Ross Clark’s “The White Feather” having its world premier at the Union theatre. 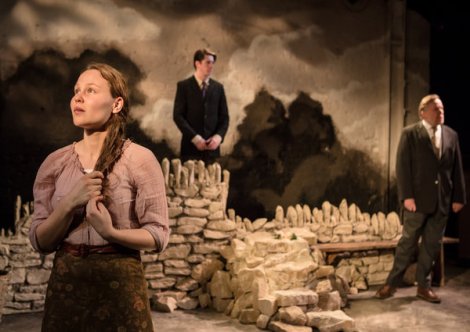 In the small East Anglian village of Upton Davey in the summer of 1914, Georgina Briggs (Abigail Matthews) and her 16-year-old brother Harry (Adam Pettigrew) have just buried their old father.  The rest of the village had turned out for the funeral including the local lord of the manor Adam Davey (David Flynn), a man trained from birth to command.  Whilst Georgina is polite and deferential, both Harry and their friend Edith (Katie Brennan) are sullen and rude to the young man who, takes it with good heart – after all they all work for him on his land and live in his village.  Shortly after this, the war starts to intrude on village life as the army started recruiting able-bodied men for the front.  Harry wants to go with his mate Peter (Lee Dillon-Stuart) and despite the protestations of his sister gets advice from the recruiting officer (Christopher Blades) on how to get in despite his youth.

Up at the big house, Adam confides to his friend Edward (Zac Hamilton) that he doesn’t want to go to war.  Edward suggests the pretty radical step of Adam getting married as his way out of going, But for Adam this is too much and as the war goes on, the locals, led in part by the ‘social conscience of the village’, Emma (Cameron Leigh) and Hannah (Kathryn Rutherford) start to talk against Adam and he receives white feathers – the symbol of cowardice – from many sources.  This leads him to firstly to offer Georgina Briggs the job of running his house and sets off to war.  On receiving his commission – he is a gentleman after all – Adam joins his regiment which numbers Harry and Peter in their number.  Harry is not having a good war (as if there is such a thing) and is severely shell-shocked leading to him disobeying the order to go over the top.  Following a field trial, Harry is executed for cowardice and treason.  in 1918, the war ends and Peter and Adam return back to Upton Davey to take up life again.  But the world has changed and, certainly for women, the old standards and ideas are put into the dustbin of history.  Georgina is very upset that Harry’s name is not allowed on the village war memorial and when she finds out the horrible truth about his death, she sets out on a one-woman quest to get him a pardon for his ‘crime’. 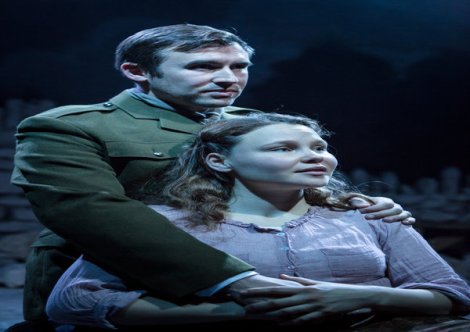 The execution of those deemed as cowards in the first world war is a really complex subject to go for, especially if you are writing a musical.  There were undoubtedly cowards at the front but there were also a lot of men and boys who were suffering from shell shock and other psychological conditions.  Ross Clark and Andrew Keates have written a powerful book which tackles not only this subject but also the issue of homosexuality in the trenches.  Harry’s story itself is gripping from the time he misguidedly signs up to his final death – which is beautifully staged with my favourite song of the evening ‘I’ll tell you what I’m Fighting For ‘ – is quite harrowing as we sit there knowing this poor young boy is doing the wrong thing for the wrong reasons and will be paying the ultimate price for his naivety.  Adam Pettigrew is truly wonderful in this role and brings a fantastic sensitivity to the uncultured, honest and loyal Harry.  He is matched by Abigail Matthews as Georgina, and it would be easy to believe the two of them really were related so believable is their onstage chemistry together.  Abigail’s intensity and emotion as she does everything to clear and defend her brother is truly fantastic to see and I would not have liked to be the anonymous civil servant standing in her way.

The rest of the cast were equally good.  David Flynn’s Adam was perfectly pitched as the man born to wealth and command who is used to having everything he wanted and has real trouble adapting to the real world outside of his village.  Zac Hamilton has to walk a very fine line with the character of Edward, as he could easily be a figure of hate for the audience but somehow he manages to come across in a sympathetic way as just a man who has a secret and really just wants to be open about his love.  In some ways I was surprised that the village did not really turn on Edward – despite the rumours circulating – but that is a minor point.

Turning to the production itself, Director Andrew Keates has brought the story together very well and the set design by Tim McQuillen-Wright is really appropriate for both the village and the western front.  Costumes were on the whole pretty good though, as an ex-forces person, I personally think that some major rethinking is required on the army uniforms which were really not era or rank appropriate.

So, to sum up.  “The White Feather” is an intense and emotional musical with some very moving songs and a very strong story that does nothing to hide an ignominious moment in British history.  It is not a traditional musical in any way but is of the finest traditions of musical theatre.  If I’m honest, I would have liked to see more of Harry’s story but that is a minor point in what was a fine musical with a poignant story to tell.

One response to “THE WHITE FEATHER – Union Theatre Until 17th October”