Famed as the musical for people who don’t like musicals, I was delighted to be given the opportunity to revisit this quirky and surprising show. Not since 2007 have I been exposed to the Bad Idea Bears (possibly my favourite artistic invention) and the disgusting yet loveable porn-obsessed Trekkie Monster.

The Sell A Door Theatre Company brought a splash of colour and humour to Bromley (along with a pleasingly younger theatre-going audience) in a production that is slick and enthusiastic. If you missed the Tony award-winning show first time around, it was originally an idea based on Jim Henson puppets, conceived by Jeff Marx and Bobby Lopez. The idea, along with the book by Jeff Whitty, grew out of their childhood experience of puppet shows and a desire to do challenge preconceptions of musical theatre.

The show takes place in the captivating squalor of Avenue Q. The set design (Richard Evans) is simplistic yet effective, with three tiers of action and a variety of pop-out parts of the main stage piece.

We meet Princeton, a hapless University graduate who has no purpose or direction (What can you do with a BA in English? Write theatre reviews?). He makes friends, grows up and learns about life from the dubious charms of the local inhabitants.

The cast are actors and puppeteers, on stage, manipulating the puppets as they speak. It’s a feat in itself, especially for the three lead roles, who occasionally have to manipulate multiple characters and voices at the same time. All credit to puppet coach Nigel Plaskitt for honing their impressive skills. They are supported by humans in the shape of Arina Li, Richard Morse and Etisyai Philip (I’m only just old enough to get the Gary Coleman reference) who were fantastic foils to their felt pals. 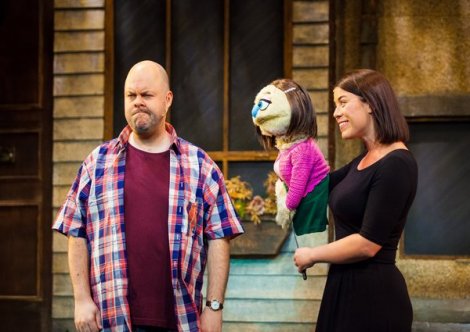 The cast are very slick. Stephen Arden received rousing applause for his portrayal of Trekkie Monster/Nicky and one of the BI Bears and it was well deserved, he was incredibly charismatic and versatile. I found Richard Lowe more convincing and powerful as Rod rather than our main character Princeton. His tone was lovely, but at times a little dwarfed by the over-enthusiastic live band, who perhaps could have measured themselves more closely to the vocals at moments of climax. Sarah Harlington was so adept at the mild Kate Monster, I was concerned she wouldn’t be as convincing as the raucous Lucy the Slut, but was not disappointed. Her rendition of the show’s one ballad, It’s a Fine, Fine Line produced a genuine tingle.

The second act isn’t quite as shocking or as fun as the first, but it keeps its momentum, and it is surprising how empathetic you end up feeling towards what is essentially scraps of material and sticks, even if they have been masterfully produced by the talented Paul Jomain.

Laughter is good for the soul. I left the theatre with (surprisingly, considering the cynicism) a sense of purpose and hope, and of overall not taking anything too seriously. Catch it at the Churchill Theatre until Saturday. It’s only for now…

One response to “AVENUE Q – Touring”