As someone raised on West End musicals, I’ve grown used to grand spectacles, produced on a huge scale and a big budget, with lavish sets and an army of stage crew. It never would have occurred to me that you could present a show of that kind in a fringe theatre, with a cast of twelve and a band of five. Yet Thoroughly Modern Millie, at the tiny and intimate Landor Theatre, does just that – and is easily as entertaining as any of those big productions.

Based on the 1967 movie of the same name, this is the story of Millie Dillmount, who arrives in 1920s New York from Kansas, determined to make a new life for herself by marrying a rich man. But before long, she finds herself forced to choose between love and money, at the same time as foiling a kidnapping plot and saving her friend from a life of ‘white slavery’ in the Orient. It’s all a bit ridiculous, really, but with likeable characters and a positive message, there’s still plenty to enjoy.

Obviously, I’m not going to try and compare this production with a West End musical; that would be unfair. The smaller space at the Landor necessarily means some compromises on staging and set design, because there simply isn’t room for anything besides the actors and a few essential props, and even then, the stage gets pretty crowded at times. So maybe we can’t quite visualise the vast metropolis that is New York, but what we do get is the spirit of the 1920s, in bucketloads – most notably during the dance numbers, choreographed by Sam Spencer Lane and impeccably performed by the cast, bringing energy and style to the production, and making it feel like a much bigger show than it is.

The cast also shine in Jeanine Tesori’s musical numbers; there are certainly no weak links in terms of vocals. As for the acting performances, Sarah-Marie Maxwell delights as the sweet and innocent Miss Dorothy, who just wants to live with common people, and Christina Meehan is hilarious as the forbidding Miss Flannery; I wish hers was a bigger role. Meanwhile leading lady Francesca Lara Gordon’s Millie is a mistress of the sardonically raised eyebrow and coy glance, but feels just a bit too cool and confident from the moment she steps off the bus and gets herself a haircut. Ben Stacey is cute and charming as Jimmy, although I must admit I found his overpowering New York accent a bit distracting sometimes.

Ironically, there’s plenty in Thoroughly Modern Millie to make a 21st century audience wince, although no doubt in 1922 it would indeed all have been very modern and forward-thinking. The suggestion that women have to be either actresses or typists obviously now feels dated, while Millie’s seductive assertion that girls like to be taken by ‘brute force’ met with slightly uncomfortable silence. The kidnapping sub-plot, featuring a failed actress pretending to be Chinese – and seemingly getting away with it – well, that’s just bizarre. I feel for Steph Parry, who plays Mrs Meers; her comic performance, which in other circumstances would have the audience rolling in the aisles, gained for the most part only cautious laughter, tinged with awkwardness, as we all tried to figure out if the storyline was offensive or not. 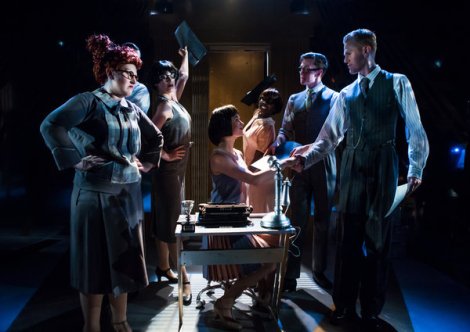 The production, directed by Matthew Iliffe, is slick and professional, with so many quick costume changes I soon lost count, and several members of the cast taking on two or even three roles, not to mention making up the ensemble as well. They’re supported by Chris Guard’s band (fantastic even with 20% of their number trapped on the Northern Line), who maintain the show’s energy throughout, but without ever taking the focus off what’s happening on stage.

SDWC Productions’ revival of Millie is a lot of fun; fast-moving and funny, it brings the 1920s to life in style. True, some of the subject matter leaves a bit to be desired, and the story is all very silly, particularly the contrived happy ending. But the company take it on with enthusiasm and bring us an entertaining, toe-tapping performance that makes effective use of the limited space available. The production would certainly be lost on a West End stage in its current format, but there are occasional glimpses – particularly during the dance numbers – of the kind of show this could be if it had room to grow.