An “exclusive” opportunity is how the email read from the lovely Official Theatre and they certainly didn’t disappoint! This event was a two-fold opening night. The Waldorf Hilton set in its prestigious location on the Aldwych have refurbished one of their suites in the theme of The Beatles and who better to launch it then these Fab Four one of the casts of Let It Be From left to right Ben Cullingworth (Ringo) Paul Mannion (George) Ryan Coath (John) Peter John Jackson (Paul)

On arrival at the Suite we were greeted and entertained by our hosts at The Waldorf Hilton much to our delight whilst the talented cast were finishing rehearsing. Having stayed at this hotel many times I was not surprised by the level and attention to detail that has been bestowed upon us at the launch and within the suite itself.

We then had an opportunity to listen to a private acoustic set, interview the Fab Four and check out the suite. What follows is a few of my thoughts and delights of the 75 mins I experienced!

Here is a few seconds of We Can Work It Out Ryan Coath (John) Peter John Jackson (Paul) Paul Mannion (George) and Ben Cullingworth (Ringo) have a huge amount of talent among them as you will see by this stripped down performance. All have a wealth of experience playing the fab four and have toured in Europe, Asia and beyond. Ryan Coath also opened with the show when it transferred to Broadway. Here’s a second mini video for you Here Comes The Sun. A further post will be on Carn’s All About Theatre shortly that will be reviewing the show and discussing the talents of both casts of  Let It Be. 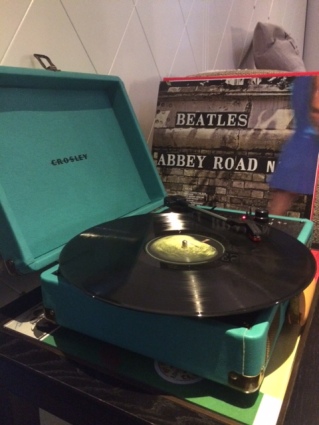 When the boys stopped playing there was music playing from the record player and the television was streaming DVD’s of the Beatles films whilst we were there.The decorations are all Beatles inspired.

I promised in my last blog that I would ask some questions if I got an opportunity so here’s a selection with some alterations and apologies but I was a little star struck! (I’ve used their characters names)

@ellsee79: “Fave set and/or song in the show

Paul While My Guitar Gently Weeps

@MissLisa1978: If you could portray 1 of the other Fab Four in LIB, who would it be? From @MissLisa1978 & @IAmStaceyFierce

@EllaZinc: @Carnfarmer What socks do you wear on stage? (It’s my go-to question)

John:White socks but with Orange socks over at one point for a quick change 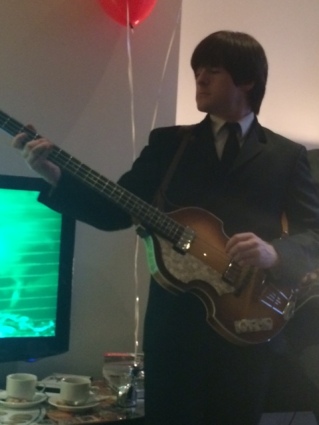 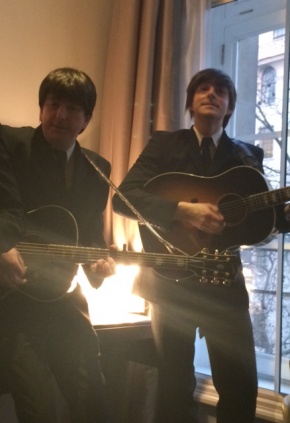 @carnfarmer: As a performer I always had a worry song, A song that I would generally relax after when done?

Ringo: It Won’t Be Long (particularly star struck at this point so couldn’t read my answers sorry!)

My next blog over on Carn’s All About Theatre will be the review of the show and the balcony set.

However if you want to try “A day In The Life” of a Beatle take a “Ticket to Ride” or become a “Day Tripper” for a stay at The Waldorf Hilton and book yourself into the Let It Be Suite before it closes on the 30th April, because come the 1st of May that chance will have only been “Yesterday” and you might be facing a “Revolution” at a wasted opportunity!

One final video clip for you to enjoy: Waldorf Hilton Let It Be Suite Media Launch Video by Rebecca Felgate Of Official Theatre
Thanks as always for reading!

One response to “Beatlemania lives on @WaldorfHilton1 with a suite launched to the media by the cast of @LetItBeLiveUK on their own Press night! ”