I posed this question to my Twitter followers today – Do you ever experience a “show hangover” the day after you’ve seen something so thought-provoking and terrific? Thankfully I didn’t feel completely alone or stupid for very long. This production definitely caused me that feeling today, the day after the night before was laying heavily on my heart.

Known as a Broadway show of epic proportions, I was intrigued, to see how it could possibly be staged in one of my favourite, if not smaller London theatres, Charing Cross. With a company consisting of twenty-two cast members, not only acting but also providing the music, this small space was filled to the brim with phenomenal talent.

It is the turn of the 20th Century in New York. An era is exploding. A century is spinning. And the people are moving in rhythm and rhyme to the music of Ragtime. Based on the novel by E.L Doctorow, Ragtime weaves together the story of three groups in America, represented by Coalhouse Walker Jr, a Harlem musician; Mother and her white, middle class family in New Rochelle; and Tateh, a Jewish immigrant who has come to America with his daughter seeking a new life. Their fictional lives become dramatically intertwined with one another as well as with historical figures including Harry Houdini, Booker T. Washington, JP Morgan and Henry Ford. 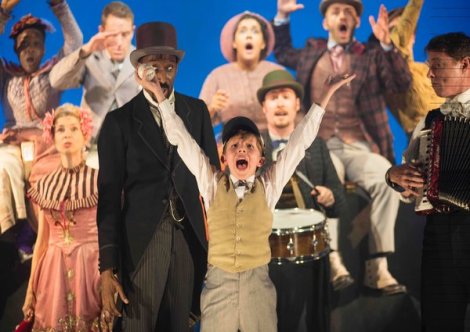 This production oozes charisma, and charm. You only have to look at the production shots to feel you are stepping back to a time, when class divides were infinitely apparent. The dismissal and non-acceptance of immigration, along with the appalling reality of segregation. The portrayal of which at times makes you feel sick at the harsh realism of an era. The use of words that we feel repugnant today was inexplicably acceptable then.

Three stories which collide and intertwine make for a completely engaging evening, which is no mean feat as this is a longer than average musical. Testament to the outstanding cast, all of which undoubtedly deserve a mention. However to retain your interest I will just mention a mere few. Earl Carpenter plays the unforgiving and non-progressive father. At times you almost dislike him however he is to-be pitied, and when needing to step up, he shows he really does have a heart, he just doesn’t know how to show it. Mother played magnificently by Anita Louise Combe is the polar opposite and shows love, kindness, respect and acceptance of her fellow beings. Strong and defiant Valerie Cutko as Emma Goldman and whimsical Joanna Hickman as Evelyn gave their characters every nuance required. Gary Tushaw grabbed you by the throat, with his portrayal of struggling immigrant Tateh, who was just trying to look after his daughter, looking for the life that he had believed that America had to offer. Tushaw gave a truly warm, stunning and tender performance.

However the biggest kudos goes to Ako Mitchell (Coalhouse Walker Jr) and Jennifer Saayeng (Sarah). Their acting, chemistry and heavenly voices showed what immense talents they undoubtedly are.

It’s rare to see a cast this big, in such a confined space, playing their own instruments (in fact there is no orchestra the cast play all the instruments) and still be in total sync with each other and move as though they are one. Captivating and ingeniously infectious choreography of Ewan Jones along with (to-be expected) perfect direction by Thom Southerland gives for a production of epic proportions.

Such musical numbers as What Kind Of Woman, New Music, Atlantic City, Buffalo Nickel Photoplay Inc and of course the title number Ragtime, all make for an evening of toe-tapping immense enjoyment. Accompanied by moments of reflection and love in Goodbye My Love, Nothing Like the City and Sarah Brown Eyes.

I left this show feeling uplifted, full of life, it was strangely life affirming, whilst being heart-rending, thought-provoking and moving. I was reduced to tears on more than one occasion, first for the sheer euphoric joy of this beautiful piece with both individual and ensemble, stunning performances. Secondly for their despair and hopelessness and the need they felt, to take justice into their own hands.

So returning to my opening paragraph, yes today is the day after the night before, I have a “show hangover” that mirrors the epic proportions of the sublime production itself.

This show is simply an unmissable triumphant revival!

One response to “Review: Ragtime”