It begins with an ethereal figure, dressed all in white, silently lighting candles amidst the ruins. The waves lap gently on the shore, as a man watches thoughtfully from a distance.

This is the scene as you arrive at the Rose Playhouse for their production of Iphigenia in Tauris, directed by Pamela Schermann. Goethe’s play, written in the late 18th century, loses nothing in translation, taking a complex story and boiling it down to a simple principle: while lies and violence may get you what you want in the short term, truth and goodness will always win in the end.

Iphigenia has been exiled in Tauris for many years, as priestess to the goddess Diana. In that time, she’s convinced the king, Thoas, to spare the lives of countless strangers, who should, by law, have been offered up as sacrifices. When two men are washed ashore, Thoas, angered by her refusal of his hand in marriage, orders Iphigenia to kill them – neither of them realising that the men are her long lost brother, Orestes, and his friend. It falls to Iphigenia, desperate to return home and pulled in all directions by the men around her, to do what she believes is right… even if it costs her everything. 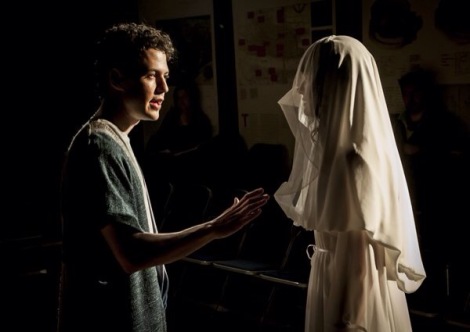 Suzanne Marie is simply mesmerising as Iphigenia, the lone woman. Her lilting, melodious voice and piercing, urgent gaze provide a counterpoint to the men, whose first instinct seems always to resort to deceit, anger and violence. But while Marie dazzles, this by no means leaves the rest of the cast in her shadow. Ben Hale is particularly striking as the tortured Orestes; he’s determined to welcome death as punishment for his crimes, despite the pleas and gentle encouragement of his lifelong friend Pylades, movingly portrayed by Andrew Strafford-Baker. Meanwhile James Barnes brings the intensity that recently made him such an incredible Othello to his role as Thoas, and Alec Bennie perfectly captures the bewilderment and frustration of Thoas’ loyal friend and follower, Arkas, who can’t understand why Iphigenia won’t just do as she’s told.

This was my first visit to the Rose, an archaeological site that offers a unique and magical setting for this powerful production; it really does feel like looking into another world. While most of the action takes place on the viewing platform, only inches from the audience, Gillian Steventon’s set design makes use of the entire space. In doing so, it creates a backdrop that transports us to the shores of Tauris, with Diana’s altar a constant reminder of the unwelcome duty Iphigenia’s expected to fulfil.

Being based on a Greek tragedy by Euripides, Iphigenia in Tauris was never going to be a happy story. Yet despite the horrors that provide the background to this dark tale, you can’t help but feel uplifted by its idealistic message. The male characters make it clear that, as a woman, they expect Iphigenia to do as they command. Her refusal to bend or go against what she believes to be right is just as inspiring in today’s world, where the challenges we face may be different, but are no less real. This simple but incredibly powerful production takes a modern message and places it in a stunning historical setting that’s at once intimate and spectacular. See it while you can.
LISTINGS INFORMATION